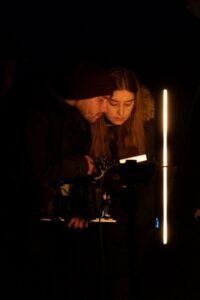 In partnership with the Jean Monnet Center of Excellence at Florida International University and the University of Pittsburgh’s European Studies Center, the Center for European Studies at the University of North Carolina–Chapel Hill, continues a range of activities under the initiative “MEET EU: Making Encounters, Engaging Transatlanticists.” In addition to activities like a short film competition, Model EU teams, virtual presentations for K-12 education, and expert career panels, the initiative includes hosting an emerging EU virtual filmmaker resident. During this year’s virtual residency, Vida Skerk will remotely engage with the artistic communities and academic life of the three universities and will travel to spend a week at each institution. Skerk’s film will also be screened and promoted in the three locations.

Vida Skerk is a graduate student of Film and TV Directing at the Academy of Dramatic Art in Zagreb, Croatia. She was born in Trieste, Italy, in 1999. She is the author of a dozen short films, both documentaries and fiction, such as Night Ride, Rosebud, and Hister, which were screened at multiple festivals. Night Ride (Noćna vožnja) is the film with which Skerk applied this residency.

Born and raised in Trieste, an Italian town near the border with Slovenia, she has spent her life questioning the various “borders”, both physical and cultural, which defined her existence and the identities of those around her. She considers herself Croatian, Italian, and Slovenian, and her background is just as multicultural as is her birthplace.

“I grew up constantly questioning my own identity, which I have always thought to be a multifaceted and anything-but-permanent construct. On the other hand, I have frequently encountered people whose views on identity were the opposite, and they struggled to understand why I so strongly oppose the idea of defining myself in black-and-white categories. I believe this struggle to clearly define who I am as a person often surfaces in my work as a filmmaker. My focus has lately been not only on the question of national identities but also on sexual identities, and other categories we tend to put ourselves into.”

Her graduate film Night Ride explores quarter-life identity crisis through the perspective of a twentysomething student in Croatia. Dunja, the main character, questions her decision to move to a bigger city and regrets leaving behind the safety of her hometown where she could always count on the support of her close friend, Sara. Exploring the “borders” and boundaries of the film medium itself, the film is constructed as a series of dreams and nightmares which evade a linear narrative structure, and retain the qualities of a more stream-of-consciousness type of approach, presenting to the viewer Dunja’s inner world in its most authentic, raw and honest form.

In her feature-length project which the filmmaker intends to develop during the MEET EU Residency, she intends to keep exploring the possibilities of surrealist filmmaking, but within a more traditional, narrative structure of genre filmmaking – specifically, horror.

“Night Ride is a film that inevitably touches on certain issues in contemporary Croatian society, but it remains quite personal. With this feature-length film project, I wish to further explore the current state-of-mind of young Croats, but I also intend to look at it through a bigger lens, though a broader, societal perspective. As such, problems that at first might seem to concern only individuals, are presented as symptoms of bigger issues concerning Croatian society as whole – and its cruel, alienating, and inherently violent practices. It partially stems from my personal feelings of alienation and the pervasive feeling of “otherness” I keep feeling since I moved to this country. And I believe that, unfortunately, there are many others who have been feeling the same and who could, perhaps, find solace in this story, and realise that they aren’t so alone, after all.” 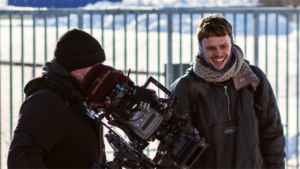 During the virtual residency, Elvås remotely engaged with the artistic communities and academic life of the three universities and traveled for a week at each institution. Elvås’s film was also screened and promoted in the three locations.

Having recently graduated from the Stockholm University of the Arts, Elvås applied with A Swedish Defence, a short film about a Swedish weapons engineer and his anti-war activist daughter and a protest that interrupts an international arms deal. Elvås sees his project as thinking through Europe and Sweden’s self-image, so the residency’s emphasis on European identity and relationships. “The themes I’m continuing to come back to are shame and the search for family and family connections, and [for] the last two years I’ve been trying to find ways to talk about bigger subjects through these smaller themes.” He has been particularly interested in Swedish weapon export, since Sweden has been in the top ten of weapon sellers for the last ten years. “It sits very badly with our values – we are known as being an open country that takes in a lot of refugees, that stands up for what’s right and wrong, or at least that’s our self-image, but this doesn’t really correspond with also selling weapons to the same countr[ies] that we sometimes save refugees from.”

During the residency, he will be working on a feature-length film that investigates these issues surrounding a Swedish weapon deal with Thailand that started in 2006and ended in 2013. The deal sold Swedish fighter jets to the military, and “the last deal, the last jets [Sweden] gave them, was just a couple of months before they had a military coup.” Elvås’s film will thus follow a father and daughter to Bangkok in this time, exploring the tension in their relationship as the father, a weapons engineer, works on the deal and the daughter meets teens in Bangkok and begins to question her political values. Elvås recently received a grant from the Swedish Art Council to travel to Bangkok in August 2022 for a research and planning trip. 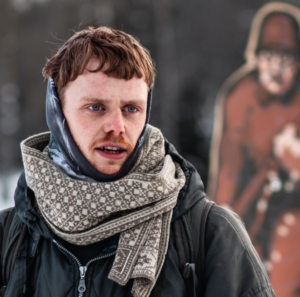 Elvås is drawn to considering the gray areas in these types of big political issues, likely, he says, because of his parents. “My mother was Vice-Chairman of the Swedish Peace [and Arbitration] Society in the 80s, so she’s been very active against weapon systems. And my father, on the other hand, was State Secretary for the Social Democrats, which is the political party here in Sweden that is in charge of the majority of weapons sales…so basically [there was] a lot of arguing about this, and it created this feeling in me that, oh, this is so complicated, and it really does have different sides and I would like to try to create something that brings both of these[sides] up.”